The breadth of Northern England, from Robin Hood’s Bay in the East to St Bees on the Cumbrian coast in the West, is roughly 190 miles. A well-mapped route à pied traverses North Yorkshire’s beguiling and desolate heather moorland, the Dales’ rolling wildflower meadows and the peaks and hollows of the Lake District. There’s a good reason that this is one of the UK’s better-known journeys. And for those who can spare a few weeks, it’s a cross-section of the country that rewards and challenges in equal measure.

Diehard Wainwright followers will do it the proper way: West to East. But going backwards, if there is such a thing, offers slow and steady anticipation of the route’s natural apex — Cumbria’s mountains and lakes. Spending time in the green, grey and intermittently blue offers an antidote to claustrophobic city living that, for many of us, is the new normal.

The first steps of any long journey are tantalisingly loaded with potential, and doubt. Setting off shrouded in the fog of an early-June morning, looking out at the glassy sea below the clifftops of Robin Hood’s Bay, you’d be forgiven for forgetting that it’s the start of summer. Fields full of dandelion clocks — ghostly white figures in the fog — serve as a reminder. But aside from that, the impenetrable gloom doesn’t give much away. There’s a noticeable chill in the air but that won’t matter after a few miles.

It’s not long before a climb Eastward reveals Yorkshire’s craggy moors: thick in atmospheric murk. This section of the walk is a good, undulating precursor to the rest of the trail, to warm the leg muscles before they’re really tested further along. Every so often passing through a typically pretty village — like Glaisdale or Grosmont, with its old-world railway station and steam trains — the trail wiggles West.

For the most part, the space between Robin Hood’s Bay and Richmond is a harsh, repetitive, landscape. It’s one of the most notable aspects of this leg of the trip: the almost-nothingness. So many of these first miles feel relatively empty, with little more to break up the horizon than the odd tumbledown grouse hide and gnarled, naked, tree. But it’s precisely this that’s so longed-for. The desaturated solitude of the moorlands is restorative. Even in the cold and wind-battered early hours up on Blakey Ridge, huddled in a cramped tent that threatens to blow away over the moors into the night, with you inside it. 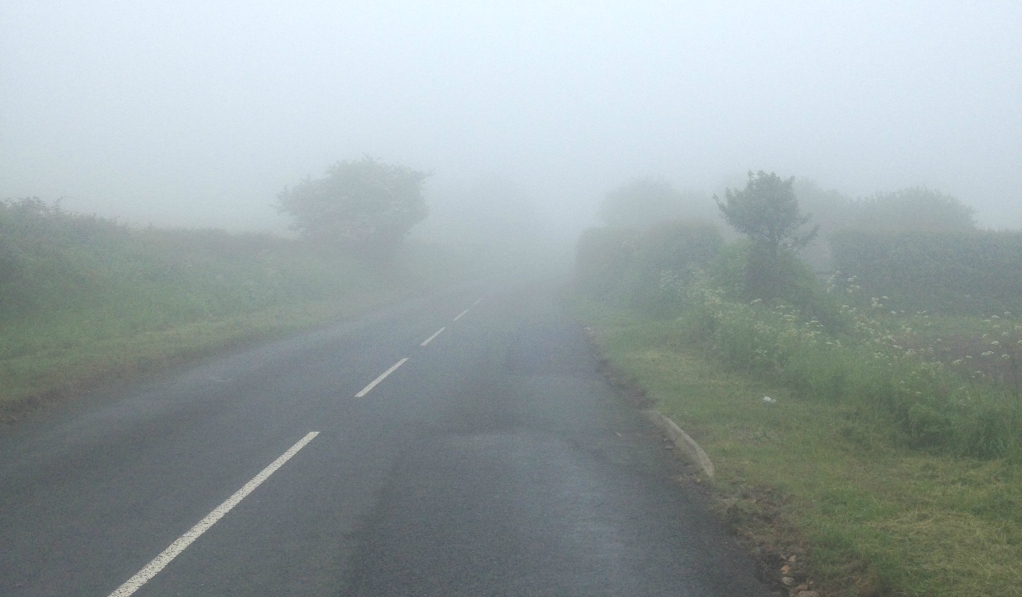 Come the next afternoon, as you reach the edge of that bleak patch of scrub and the mist finally begins to lift, you’re granted one of the first glimpses of the vast and seasonably colourful vale sweeping out below. The sun starts to warm the skin and, leaving the moors for the day or two’s descent through Ingleby Arncliffe, the whimsically-named Danby Wisk and into Richmond, you feel a bit like winter has ended.

Richmond provides the transition from winter to summer, and from open and often hostile moorland, into the rolling and brightly-hued meadows and valleys of the Yorkshire Dales. Swaledale might be one of those enchanted kingdoms from a Tolkien novel — one with place names like Crackpot and Booze. It’s filled with the sounds of babbling brooks and breezes through tree branches, and the smell of wildflowers and warm grass.

After Richmond, Reeth is the next major dot on the route. It’s a quintessentially English countryside village, complete with village green, three good old-fashioned pubs, an ice cream parlour and tea shop. It nestles at the junction between two hills, alongside the River Swale; which you follow for a day or so, up to Keld. Arriving on a bright summer’s day, it’s hard to imagine Reeth in the grip of winter and how isolated its inhabitants must feel when there’s snow on the ground and painfully short days. In June — if you’re lucky anyway — you’ll sit on the green in the full glow of the sun, eating your ice cream and contemplating a crisp cider while you rub your aching feet.

A little way along from Reeth is the Muker valley. Known for its frenzy of wildflowers in the summertime, it’s a very short diversion from the main trail and worth the double-back. Then to the riverside again and up to Keld, which has a sort of edge-of-humanity outpost feel to it.

You leave the Dales around Kirkby Stephen; a worthwhile rest stop before the strenuous trek to Shap, sitting at the gateway to the Lakes beyond.

It’s with good reason that we saved the Lake District until the end of the trip. We’re city-dwellers, and so on day one — unless you’ve had the foresight to train properly — legs will be soft and lazy from too many days spent commuting to work and sitting at a desk. By the halfway mark and onwards, there’s newly-developed calf muscle and stamina for the scramble to the peaks and, oftentimes tougher, sustained descents. Even lung capacity seems better than it did at the start of the trail. So, for the un-seasoned, building up to it doesn’t just allow you to save some of the best views til last; it means that you don’t fall at the first hurdle and spend two weeks in a St Bees bed & breakfast instead.

The stretch between Shap and picture-perfect Patterdale is difficult. It presents the double threat of Kidsty Pike — the sharpest peak you’ll have faced to this point, and a steep climb to the top from the ‘wrong’ direction — and the seemingly endless stretch of Haweswater Reservoir in the lead-up to your pinnacle climb. The view from the top is something, though. And the amble down into Patterdale, all the sweeter for having accomplished it. The village is in the seat of a lush river valley, surrounded on all sides by hills and mountains and home to a comfortingly good pub at the end of a long and tiring day.

From Patterdale, there are three routes to take and the weather may choose one for you. If awe comes to you from looking up at a mountain, the low route along Grisedale Beck has views of Helvellyn to your west and St Sunday Crag to your east. Should you inadvertently find yourself on St Sunday, as it seems it’s easy to do, you’ll have panoramic and breathtaking views across the Lakes and its many jagged peaks, including the mighty Helvellyn. Standing up here, you’ve an apt opportunity to take a deep breath and congratulate yourself on your achievement thus far, before meandering onwards to Grasmere.

The last section of the coast to coast has plenty of ascents to hold your interest, and potentially some of the bleakest weather to add to the challenge. As the last day dawns and you set out towards the open coastline — blessed with blue sky — you can’t help but be filled with a sense of wonder. And wanting to turn back and do the whole thing again. It’s perhaps on these last few miles that you realise you haven’t thought about ‘normal’ things since you set off. The brain has been entirely preoccupied with keeping one foot in front of the other in a steady, therapeutic, metronome.