For some, there is no feeling comparable to finding absolute seclusion in nature. Striding out into the wilderness and pitching a tent under a blanket of sky or tree canopy has been the subject of many a literary pen. And with so much rugged countryside joining the dots between our towns and cities, it’s easy to understand why. Whilst true wild camping isn’t permitted in England without explicit permission from the landowner, you don’t have to journey far to escape the stresses of daily life.

Scotland has over six thousand miles of coastline and more than thirty thousand celebrated lochs, each with their own stretch of beautiful inland shore. It’s a landscape of windswept romance. Of wild woods, craggy escarpments and jarringly beguiling Highlands. Limits are rarely imposed on wild camping in the Scottish countryside, save for a few exceptions, which makes it an easy consideration for a weekend of deep thinking — away from the racket.

The Cuillin mountains have long enticed people to Skye. But this petite island has a wealth of otherworldly treasures to share, and they are all best explored on foot — with the promise of bedding down amongst the nooks once the sun sets. The Quiraing is a little-known but sprawling adventure playground for those seeking to climb or absorb an incredible view. Sgurr na Stri — Skye’s dwarf mountain — is said to offer some of the best panoramas anywhere on the island, making this a place worthy of extended self-reflection.

With sheer scale on its side, the Cairngorms National Park is an easy place to find yourself alone in the wild — despite its popularity. Access to lofty mountainsides, for the more adventurous, is granted via the eerily beautiful reforested glens. Breathtaking inland beaches, at lochs like Morlich, and sprawling open moor offer a landscape in which everyone can achieve their own escapist ideals. A note, however, to take care to bring the right clothing for what can become a hostile climate, without a great deal of warning.

The most southerly inhabited island of the Outer Hebrides, Vatersay, evokes the kind of isolation that’s hard to come by in the developed world. Inhabited by only 90 people over its 9.6km², the Hebridean beauty has both a windblown harshness and almost-tropical ocean vistas. Passing old-world settlers stumbled upon this dot on the Scottish coast time after time, welcomed by turquoise waters and miles of beaches — fringed by machair grasses that burst with wildflower colour in the spring and summer. Mountains, iron-age ruins and castles complete the sample-sized version of Scotland, with easy access granted via the causeway or island airport — the latter of which is operational only at low tide. 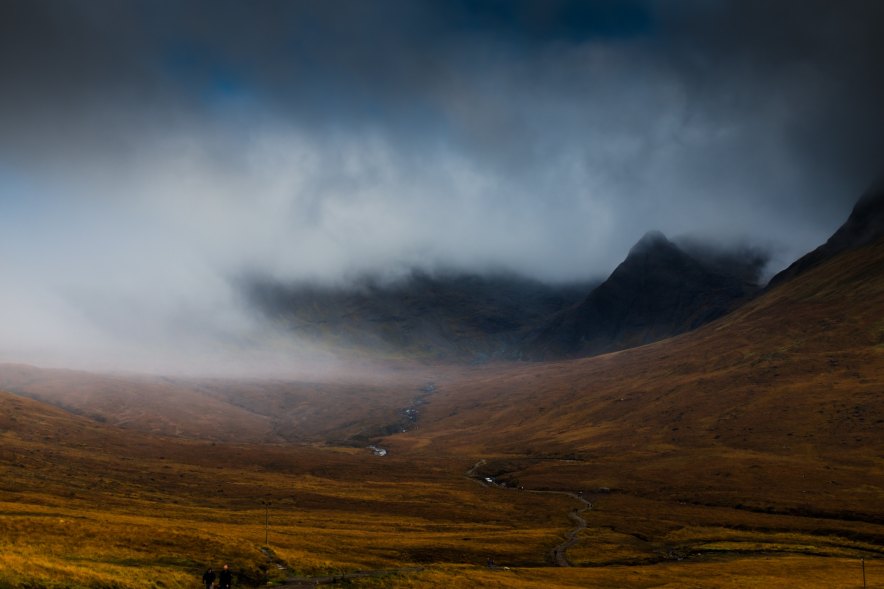 Another of those Scottish islands which are a version of the mainland in miniature. Arran boasts the spectacular Goat Fell mountain range, pointing to the island’s tallest peak. If you’ve come to climb the summit of Goat Fell there are numerous ways to approach it, but one of the most beautiful — offering plenty of opportunity for sleeping wild under the stars — is Glen Sannox. There is no need to climb at all if you prefer to admire mountains from afar. The walk through the glen, with its waterfall-streaked forests and mirrored pools, is a gently stirring precursor to a night of stripped-back essentialism.

The Cuillin mountains of Skye frame the horizon from Kilmory Bay — a favourite picnic spot of Queen Elizabeth II, no less. And with miles of pristine golden sand, dipping into brilliant blue waters on Rùm’s northern coast, there is no shortage of space to wander before pitching up and lighting a fire to stave off the evening cold. This is the largest of Scotland’s ‘Small Isles’ but is home to only thirty or so inhabitants, making for a perfect, solitudinous, visit. The island is an important ecological site; with native populations of red deer and a reintroduction of the white-tailed sea eagle. So you may not find yourself entirely alone but, rather, in the company of one or two natural neighbours.

Framed by the towering peaks of the Three Sisters, this breathtaking hanging valley is completely shrouded from the famous Glencoe Village and sheltered from the harsh Highland winds. Flat meadowland provides the perfect level pitch after walking the length of the valley floor, peppered with prehistoric boulders and trickling streams. The enormous fallen rocks provide shelter from the elements, making this secluded location a worthy stop for those seeking tranquillity in their surroundings.